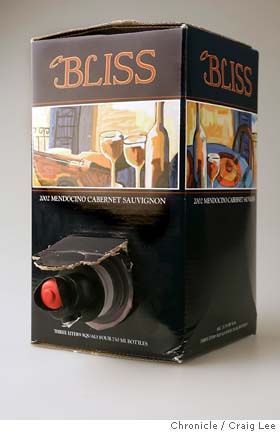 August 2004, Sonoma County, CA — Tincknell & Tincknell, Inc., Wine Sales and Marketing Consultants, continue to lead the wine industry in the branding, positioning, and development of the super-premium, 3-liter, boxed wine packaging. T&T and Erickson Design of San Francisco, California, teamed together to create the branding, positioning, and packaging design for Brutocao Cellars’, of Mendocino County, California, new Bliss Box. T&T has been the advisory consulting firm for Amicus Cellars of Napa Valley, California, on its roll-out of the X Box, including branding and introduction into their national sales markets. The X Box complements the winery’s label, X Winery, by extending their high-value, super-premium wines into the new format.

The Bliss Box is a “milk-carton” style 3-liter boxed wine, similar in shape to the Black Box, but expanding the wine label design concept into a loosely thematic triptych wrapping around the box. The name “Bliss” is a family name from the Brutocao family’s ancestry, and has been used to designate a single vineyard bottling as well as a branded second label.

“The intent was to create an upscale package that had a level of intrigue in the design to motivate the wine drinker to pick it up and explore it,” said Paul Tincknell, Partner in Tincknell & Tincknell. “The existing brand in bottle had a musical theme adding a level of romance to the branding, and the box’s design refines and extends that by placing the musical element into a more complete atmosphere.”

“The fine art pieces were set against a simple, elegant box design to showcase the triptych,” adds Maureen Erickson, Proprietor of Erickson Design. “I wanted the art and the design to convey the high quality of Brutocao Cellars’ Mendocino County wines, building on the themes they already had for the Bliss label: music, family, and people celebrating together with wine and food.”

The inaugural releases of the Bliss Box will include a 2002 Mendocino County Chardonnay and 2002 Mendocino County Cabernet Sauvignon, all estate fruit from Brutocao Cellars’ vineyards. Suggested retail price in California will be $32.00 per 3-liter box for the Chardonnay, and $36.00 per 3-liter box for the Cabernet Sauvignon. 750-ml bottle versions of the same wines will sold alongside their box brethren.

During a sales strategy meeting at Tincknell & Tincknell’s office in Healdsburg, California, the General Manager and Winemaker for Amicus Cellars, Reed Renaudin, became intrigued by the benefits of the 3-liter box packaging after examining samples of the Black Box and Blackburn Fine Wine Cache, two previous T&T projects. Soon after Amicus Cellars green-lighted a test run of 3-liter boxes of the winery’s high-value, super-premium Lake County “Eutenier Sylar Vineyard” Sauvignon Blanc, “Tri-County” Cabernet Sauvignon, and Los Carneros Chardonnay for 2004. Breaking new ground in the 3-liter box package will be the Sauvignon Blanc, becoming the first vineyard-designated wine in a box when it is launched. Tincknell & Tincknell advised Amicus Cellars throughout the project, including suggesting the name, X Box. Given the suggestive name, the X Box is positioned to appeal to young, trendy, adventurous wine drinkers. The test run of the X Box will be targeted towards restaurateurs for their wine-by-the-glass programs. Like the Bliss Box, the same wine in bottle will be in the X Box, giving a restaurateur the option placing it on their wine list, their by-the-glass list, or both. The box package is ideal for BTG programs as it costs less than bottled goods and eliminates waste due to loss from old, oxidized, or cork-tainted wine and breakage. The X Box will have a suggested retail price in California of $43.00 per 3-liter box.