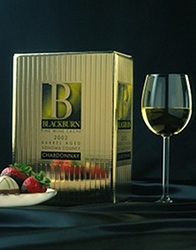 “The goal for the packaging design was to create for the Blackburn Fine Wine Cache a strong, visual, upscale image that would assure fine wine drinkers of the quality of the wine inside the box,” comments Paul Tincknell, Partner in Tincknell & Tincknell. “Boxed wine has been traditionally marketed in the U.S. at lower prices with value or premium priced wine inside. Our work first with Black Box Wines and then with the Blackburn Fine Wine Cache from Sonoma Hill Winery has been to create a new tier of high quality boxed wines for wine drinkers interested in the many advantages of the box package.”

The Blackburn Fine Wine Cache packaging design originated with Sonoma Hill Winery. Tincknell & Tincknell and Bauermeister Design took the preliminary design concepts – the gold foil exterior, the embossed pin-stripe, and the existing logo – and refined it to a complete package with a strong, branded identity. That effort resulted in a First Place win in the annual AICC design competition for the printer of the project, Pacific Southwest Container in Modesto, California. “PSC, with their knowledge and expertise in their business, assisted us greatly as the design was being developed and refined,” adds Tincknell, “They deserve the award for the stellar job they did in producing the package.” “It has been an exciting and rewarding experience to work with a team of experts in developing a high-end design that takes the packaging of wine to a new level,” says Karen Bauermeister, Owner of Bauermeister Design.

AICC, a part of the independent corrugated industry success story for over 25 years, represents a majority of the independent corrugated packaging manufacturers and their suppliers. They are dedicated to strengthening the independent’s position in the marketplace through programs and publications that empower their members to compete successfully in a rapidly changing industry and an increasingly competitive and global business environment. The 11th International Corrugated Packaging Design Competition was held September 18 and 19, 2003, in San Francisco, California. 175 entries from 47 companies were submitted for judging in 17 categories.